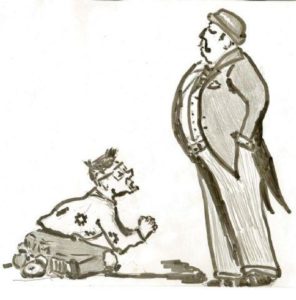 “It used to be that the a certain segment of the very wealthy understood that in return for their good fortune and the protection of America that they would pay more in taxes so that the less fortunate, i.e. the aged , the infirm and the poor among us, would have a better chance at the pursuit of happiness. In the eighties this axiom of American democracy was deemed obsolescent and the accumulation of obscene amounts of wealth, without regard for its impact upon the environment or the American body politic became the new thinking.

Social Darwinism thereafter was resurrected and multinational companies assumed greater and greater control over the American political system and the American Judicial system. Unions were demonized, regulatory agencies were understaffed and underfunded and the Federal and Supreme Courts were hijacked.

The last bastion in the crosshairs of the multinationals’ artillery is the right to trial by jury in the State Courts. Through outright falsehood spread by captive media conglomerates and the castigation of trial attorneys, this New Oligarchy has almost reached its goals of unbridled commerce, obscene accumulations of wealth by the few , and complete socio -economic control of our American society to the detriment of our children and grandchildren.

WE TRIAL LAWYERS ARE THE LAST BEST HOPE FOR An AMERICA THAT IS TRUE TO ITS PROMISE AS THE LAND OF THE FREE AND THE HOME OF THE BRAVE.  THIS IS OUR TIME TO STAND UP AND BE COUNTED IN THIS BATTLE FOR THE HEARTS AND MINDS OF AMERICA. OUR CHILDREN AND GRANDCHILDREN DESPERATELY NEED US TO DO SO.”

This message came from a colleague of mine in Massachusetts, Paul Kenney, and since I found it inspirational it rings true as a fellow trial lawyer, I thought I would post it here.  Yes Paul, I will keep the faith, and thank you!